The Jaguar Mark II was introduced in October 1959 and continued in production until 1967. The Mk II was built as a replacement for the 2,4 and 3,4 liter saloon, also known as the MKI.

The MK II was based in the MK I, but the result was different in many ways, both aesthetically and mechanically. Improvements to the design and modern materials resulted in a reduced overall weight. The interior was completely redesigned but retained its luxury and elegance with such amenities as leather and wood veneer. The attention to detail both inside and out, only amplified the ambience of sophistication. Leather seats continued to be standard until 1967 when Jaguar offered it as optional in an effort to reduce the cost of the vehicle.

Under the hood was an XK engine, the same that had won at Le Mans in 1951 and 1953. The XK engine was now enlarged to 3.8 liters producing around 220 horsepower. The engine continued to prove itself as a reliable and capable power plant. 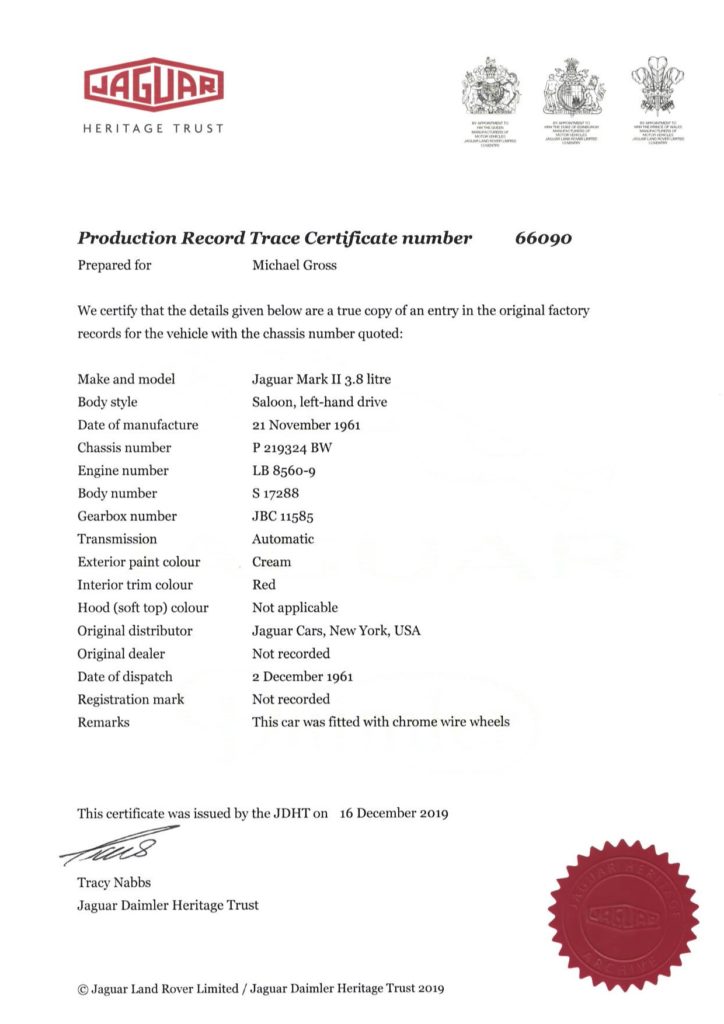 This Car was purchased new by Edward French of Napa California in 1961. Upon his passing, ownership was transferred to his son, Perry (Gus) French. Gus died in 2005. Ownership was then transferred to his niece, Darcy Fowkes, and her husband, Michael Levay of Los Altos. The MK II has been garaged its entire life, rarely spending an evening out of doors. At that time the car was approximately driven 114 thousand miles.

By the time the body was in relatively good shape, but the drive train was unreliable. Therefore, the car was hauled by trailer from Napa to Delong`s Automotive in Campbell in MAy 2005. Over the next 8 months, the car was made roadworthy. Major work included rebuilding the transmission, replacing the power steering with rack and pinion style, complete brake job, new exhaust system, conversion to alternator, and rebuilt cooling system.

After a year or so, we had recovered financially and moved on to the next phase. In December 2006, the wood was removed from the car and taken to Medera Wood Concepts in Goleta California where it was reveneered and stained. In April 2007, the car was driven to Images Auto Body in Campbell where is was painted and the interior was finished. The upholstery was done at Craig`s upholstery, also in Campbell. In addition to interior work, the car has new stainless steel wheels and white walled tires. Restoration work was completed on October 5, 2007. The Receipts of the restoration work done were totalling $ 44.000,- Prior to the restoration the Car drove 114.000 miles. Since the restoration the Car drove around 10.000 miles.

The Jaguar is still powered by its original Engine.