American Bill Devin was an influential figure in the West Coast sports car movement, and founder of Devin Cars, a company which produced racing cars and bodies throughout the 1950’s and 1960’s. 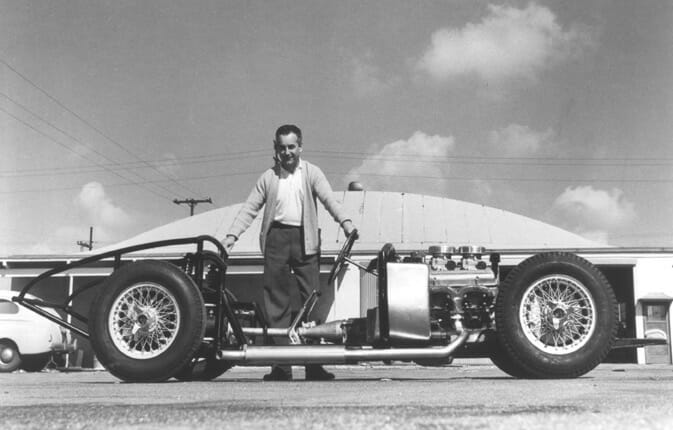 The Devin SS was the top-of-the-line model, designed for competition in the SCCA C-Modified big-bore class. The SS wore a one-piece, hand-laid fibreglass body with fixed cockpit sides and integrated seats. The aerodynamic design featured rounded bodywork in the back and fenders that protruded slightly in the front. The mould was from an aluminium-bodied Scaglietti-designed single-seater Ferrari that was modified as a two-seater sports car. The cars were built on an imported 92-inch chassis, powered by a small-block Chevrolet engine, with disc brakes at all four corners. 12-inch discs were in the front with 11-inch inboard-mounted units in the back. The entire package weighed under 2,000 pounds, and zero-to-sixty mph was accomplished in 5.7 seconds (other sources state 4.8 seconds).

The stock Corvette 283 V8 engine was modified with a low-profile manifold to clear the very low hood. In stock form, the engine offering around 220 horsepower with 300 lbs-ft of torque. With no fan, a radiator was added to provide the cooling. Again, clearance issues were a problem, so it was tilted backwards at a 40-degree angle. The engine as backed by a Borg-Warner T-10 four-speed manual gearbox with 3.70:1 gear ratio. Weigh distribution was rather impressive, with around 53% resting over the rear wheels.

SCCA requirements required 100 examples to homologate the car for racing. This was Bill Devin’s goal, however, the initial figure of 100 cars was never met. Roughly 15 to 20 examples of the Irish-chassis built cars were created. Around ten chassis were later built in California, still far short the 100 car target. Estimates vary, from as low as 15 to as high as 30 completed examples were built. Along with the compete packages, hundreds were also built as kits.

Most of the Devin SS cars were built for the track, but a few were used as road-going vehicles. Other cars that bore the Devin name included the Volkswagen/Porsche powered ‘D’ and a Corvair-engined Model ‘C.’ 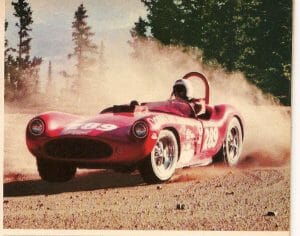 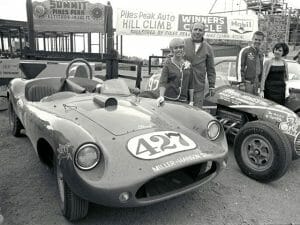 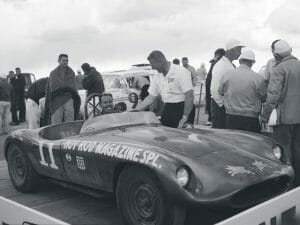 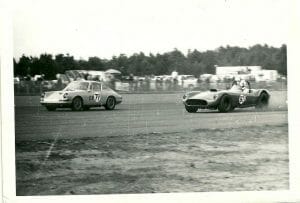 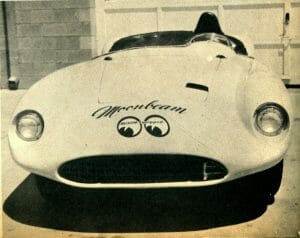 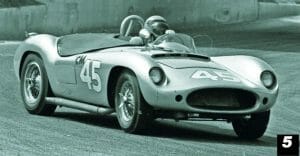 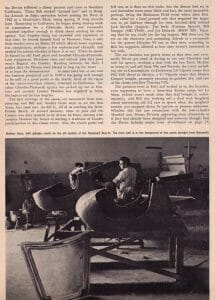 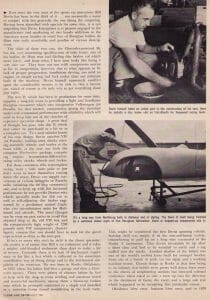 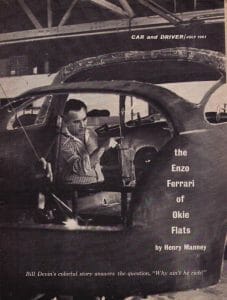 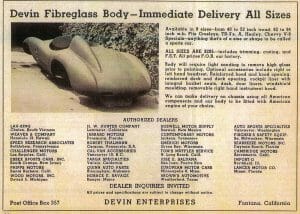 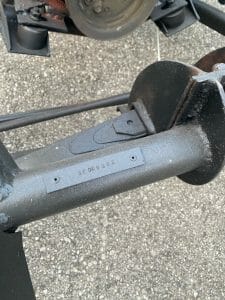 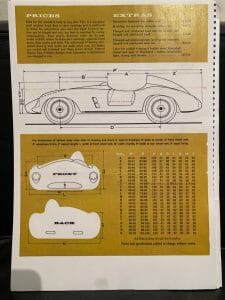 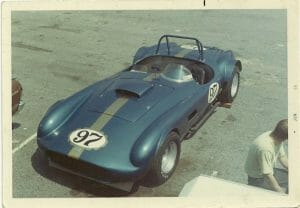 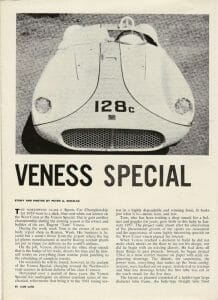 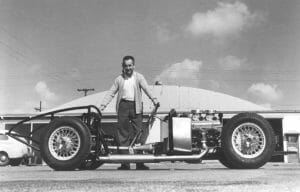 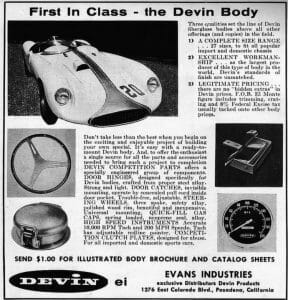 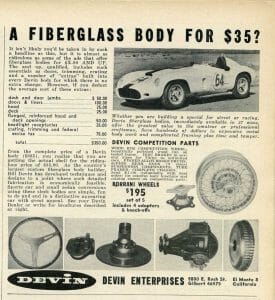 There were 15 Devin SS models built at the DEVIN factory in El Monte, California between 1957 and 1959. These cars were sold as complete cars ready to race or for street use.

The DEVIN’s raced successfully in SCCA C-modified class against Ferrari’s, Lister’s, and Maserati’s.

This Devin was probably delivered as a frame with body in 1959. The Frame came with a Ford rigid axle at the front
and Ford axle on leaf springs at the rear.
The body is a Devin X6, the largest available at the time and also the rarest according to the Devin registry in the USA.

The vehicle has a passenger vehicle registration from 1965 and a confirmation from the Department of Motor Vehicles NY.
In addition, there is a notarized bill of sale confirming that the last owner had owned the Devin since 1961. 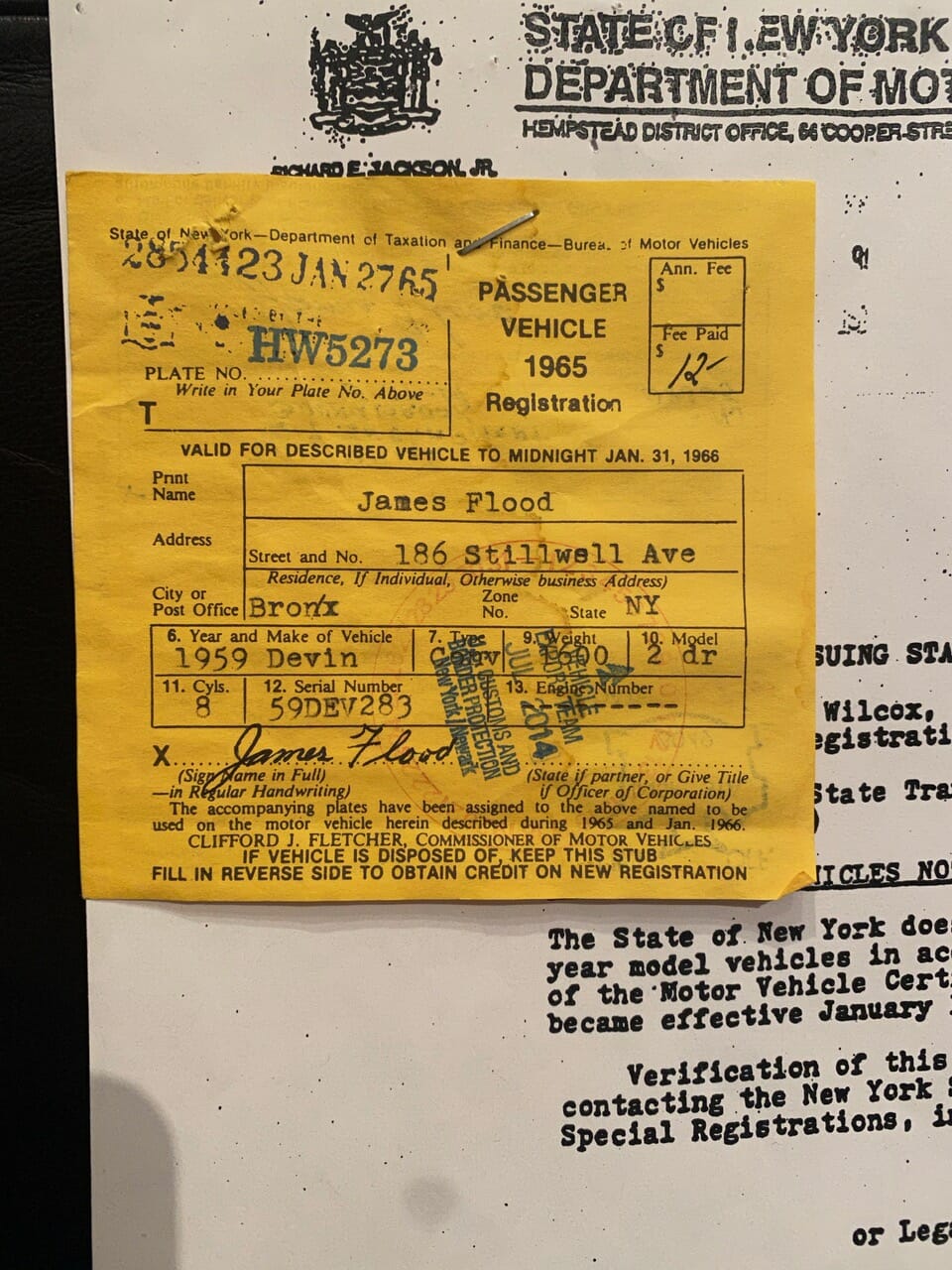 The engine is a 283cui Chevrolet V8 from a 1959 Corvette with Offenhauser valve cover, absolutely rare vintage speed equipment from the time.
The transmission is a 3-speed manual, also from a Corvette.

At auction is all you see in the pictures.

Hello this is a beautiful brute :-) this will be an awsom machine with the V8 drivetrain 👍

Hi I have a friend who is able to make doors from fiberglass…
He made parts for my Ford, a good fiberglass guy is able to fix this 👍
Cool thing this Devin !

doors can be made quite easy – and the devinregistry in the US offered to make some molds from a body they have.

Thank you for this Info !
I have seen some Historic Race-cars with doors made of Aluminium this looks nice also !and might be a period correct option too.

Guys Devin Sports Cars, LLC has the orignal door molds, hinges and latches. to make this a complete and authentic build.

I have a total flat hood on one, and Kreg and I have one with this Ferrari type hood. I believe this is a great look and adds value to the car for sale…

I definitely think the bubble hood is the best looking! And yes, the body of Stan Fowler looks exactly the same and is obviously also a big one as it sits on a C3 chassis.

I also think the bubble looks best, and I hardly can find another car with this bBbble Type Hood in the Web.
Probably most have been cuttet …..

Love the registration in New York from the 60ties

is this still for sale?

Hello Emanuele, yes it is still for sale