10 December 1999, Tokyo: Mitsubishi Motors Corporation is to launch a limited series model to commemorate rally ace Tommi Makinen’s (*1)prodigious feat of winning his fourth consecutive Drivers’ Championship in this year’s World Rally Championship. The LANCER Evolution VI Tommi Makinen Edition will go on sale at Galant dealerships throughout Japan on Saturday 8 January 2000 at a manufacturer’s recommended retail price in Tokyo of 3,278,000yen for the GSR and of 2,598,000yen for the RS trim levels.

In response to this news, Tommi Makinen said, “Wow. To have a car named after yourself. That’s something else. Over the years, I have made a number of suggestions for the LANCER Evolution series, stressing the importance of making it easy to control and fun to drive and ride, as well as giving it high levels of performance. The LANCER Evolution realizes a beautiful balance between all performance parameters and it really provided me with the perfect car to re-write the WRC record book. I would just like to say that anyone who buys the LANCER Evolution has made the “Right Choice”.

(*1) Born in Jyvaskyla, Finland on 24 June 1964; 35 years old. WRC debut was the 1000 Lakes Rally in 1987. Came to the fore in 1990 driving a GALANT VR-4 Group N machine to 3rd place in the FIA Cup Ranking. After joining Mitsubishi Ralliart Team in 1995, has won the WRC Driver’s Championship four years in a row since 1996. His total of 19 WRC victories places him third in all-time winners. He renewed his contract with Ralliart in October and will drive LANCER Evolution Group A machine in the 2000 season when he is aiming to re-write his own record book, to make it five Drivers’ Championships in row and to help Mitsubishi Ralliart to the Manufacturers Championship. 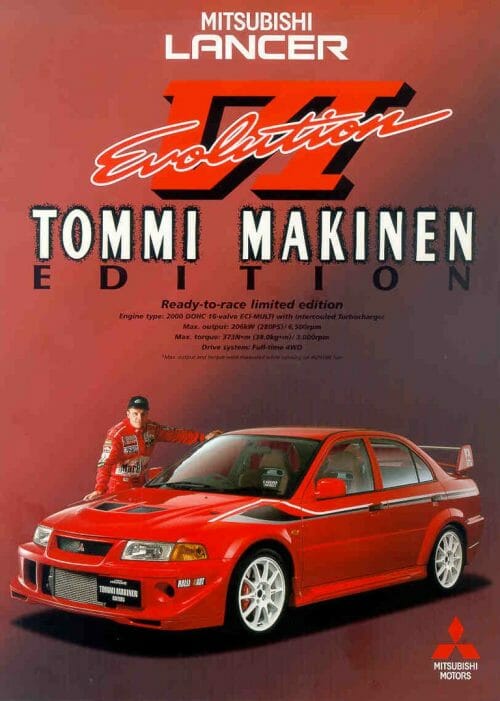 The Mitsubishi Evolution here at auction is a barely used example with only 10113 km on the clock.

We do not know the exact number, but out of the 2500 Mitsubishi Evolution 6 TME`s built, only a few were built as Lefthanddrive examples. Even fewer are barely driven, untouched examples.

This EVO was delivered to Greece and stayed there up till now. During the Acropolis Rally Tommi Mäkinen even signed the Rooftop of this rare Car. The EVO resided in a collection and was well taken care of. The EVO has a 17digit vin number

Racing homologation rules have produced some of the craziest cars to ever be sold for driving on public roads. A “homologation special” is a road legal car, produced in limited series by a manufacturer, to meet a race sanctioning body requirement. Typically, the sanctioning body (FIA as example) would state that a certain number of street cars must be produced to allow the car to compete in the racing series. The most well-known examples come from Touring Car and Rally Championship series.

What makes this “homologation specials ” so desirable?

This is your chance to own a “Special Series” under the homologation specials.

Let the pictures speak for themselves

Ok, thank you for that information