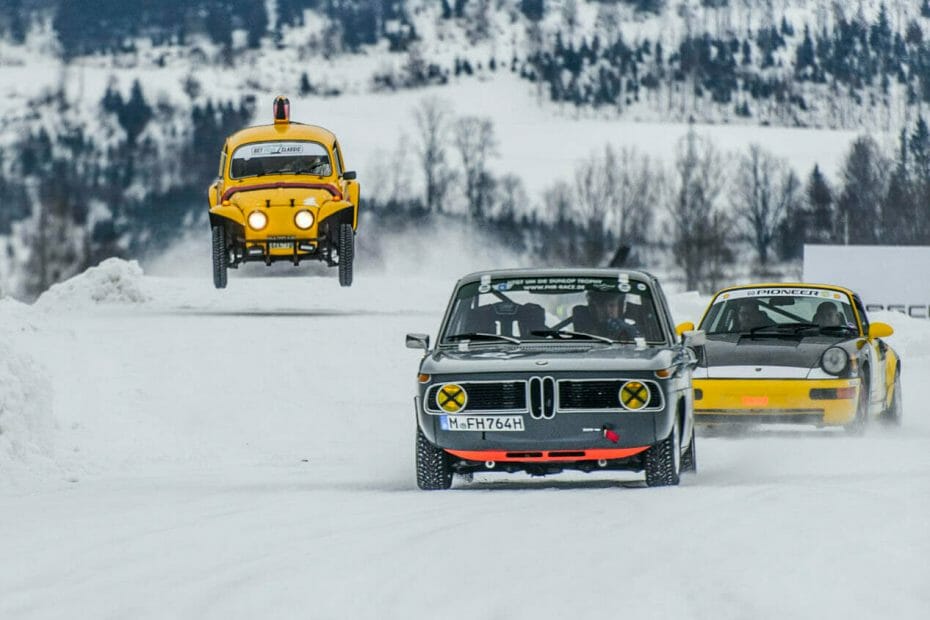 It’s summer and the news reaches us that the GP ICE RACE will take place for the 3rd time at the end of January 2022. After bringing two special cars in 2019 and 2020, a Karmann Ghia rally car and a Porsche Salzburg Beetle, we have decided to bring something very special again.

We had no idea what it could be. After selling 6 Meyers Manx Beach Buggies this year, we thought a California Style Beach Car would be a perfect fit.

As luck would have it, we heard about an original Baja Beetle that had just been found in a shed in Texas.

Being kids from the eighties, we already had the TAMIYA Sand Scorcher Baja Beetle in the garage. So it sounded like a perfect match. A few phone calls later, the deal was done and dusted and through our international partners, the car was paid for, loaded and off on its journey to a new adventure.

Only two months later, in December, it arrived in Berlin and the first inspection began to see what work was in store. It was only 2 months until the start of the GP ICE RACE. Unfortunately, our romantic idea that a car from the desert is rust-free and easy to repair did not come true. Basically the entire driver’s side was rusted away and all mechanical parts were either rusted away or in immovable motion. In addition to this unforeseen work, rumours surfaced that there would be no ICERACE as planned. Again. We didn’t care and stuck to the goal of having the car ready in 2 months if we could still get there. We did a complete technical restoration, including fuel system, brake system, engine, new floors, etc. You name it, we repaired it.

Then, a week before the start, we got the news that our friends from the new Meyers Manx Company would be on site and invited us to join them for some Californian lifestyle action in the snow. The car was ready on Friday and went straight to Zell am See. We only got the Hoots Classic Sensor System just before the pick-up.

On the one hand, to have full control over the engine and get corresponding data about the car, on the other hand, to see where the car is being transported to during the trip to Zell am See. With the GPS sensor installed, you can track the car all the time. This function also offers you an advantage when you have the car insured with our partner OCC .

We got together with the whole Meyers Manx crew on Wednesday morning to start the fun. At this point, it wasn’t really clear when we would be able to go, but that didn’t dampen our anticipation of getting to play in the snow with the buggies and the Baja right away. 4 buggies and 2 bajas. After several COVID tests, we saw the new site that Ferdinand Porsche and his team had built. New location, new track. Unfortunately, everything was closed off and no public was allowed. We were supposed to go on the track, but since Porsche needed a perfect picture on the track with their Porsche 550 Spyders, we had to find alternatives to play around with. And there were plenty of those. Fresh snow in the area, so we went wild and tested how beach cars do on snow.

and it seems like you they are built for the snow.

As the schedule for the next day was a bit unclear, we drove straight into the surrounding mountains to let off steam. It felt a bit like a challenge in the old TOP GEAR series as Clarkson, May and Hammond set off on a journey.

We came back late, when the sun had already set and the snow kept falling. We looked at the track again to see what was going on. Suddenly we got a 5-minute gap to use the track, which we did immediately, of course.

Saturday – day of the races

Our friends from FLOYD and the Gentleman Drivers Munich joined us to race against each other on the track. Unlike the years before, we were allowed to drive more than 3 laps at a time. I think it was even 10 minutes on drifting, overtaking, flat outing and jumping. And the jumping was the most fun part of it. Have you ever done that? Neither had we, until now. It ended in a jumping contest between the Manxes, the Bajas and the AUDI RS Q E-tron.

The most fun you can have with your pants on !

It makes a huge difference when you are racing against three other cars on the track, rather than just having another car on the other side of the track racing against you. This should definitely be a permanent feature of the next event.

We thank our supporters and friends who made this unique event possible.