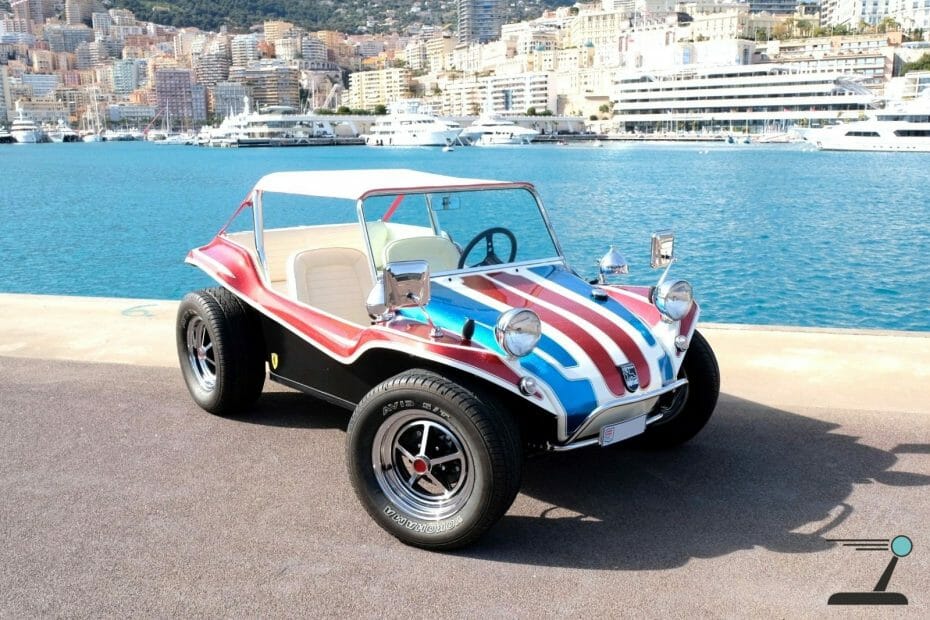 Created in 1964, Bruce Meyers greatest contribution to the automobile world, the Meyers Manx Dune Buggy, combined a VW Beetle drivetrain with a custom designed fibreglass shell. It impacted the auto industry all over the world and became a unique American Icon

It all started in the early 60ties in Pismo Beach, California, where Bruce first saw sand rail buggies. These crude vehicles featured frames either hand built or modified from old cars/trucks, which often came from junkyards. No shell covered the structure; seats were bolted in the back of the frame above the rear axle, while the heavy water pumper V8 sat in the front. Bruce loved the concept of this buggies, but he didn’t like their design. They were just ugly with no design involved.

As Bruce studied and thought art, he envisioned a lightweight version of the buggy that would be fun at the beach or the Baja California wilderness. He thereby sketched out a sleek little roadster shell, knowing that he had the skills to morph it into a full scale model; indeed, he had already learned shaping techniques to build fiberglass boat bodies.

Bruce decided to go with an air-cooled VW engine and beetle chassis, shortened by 14-1/4 inches. He seen 1 1/2 years in his spare time to create a unique buggy. In truth he remained unsure about his project… Would It function as expected? But whenever people walked into his shop, they would comment:“ What a need looking toy!“ With such encouraging words, he pursued his vision and made it a reality.  In July 1964, as the body took shape, Bruce came to realize that the short rear end resembled the bobtail of a certain animal, the Manx Cat: hence the name of his buggy – Manx incidentally, the Mayers Manx logo prominently features a Manx Cat.

Though he felt the Manx was good looking and fairly priced, he wasn’t sure anyone else would share the same feeling about his creation. But the market reactions beyond his wildest dreams. Even Hot Rod Magazine picked Old Red to grace the cover of tis August 1966 issue. Meyers Manx became an instand icon of the automobile culture, being quickly recognized as „the dune buggy“

It simple design based around a Volkswagen drivetrain led to terrific performance, even without 4 wheel drive. The rear mounted engine and rear wheel drive setup performed very well, especially in Off Road conditions. It handled better than any other all terrain vehicle and was fun to drive too. Proving its competitiveness, a pair of Manx Buggies 39 out of 41 slalom races. Another model came out on top of its class during the Pikes Peak`s Hill Climb, against much more powerful Corvettes, Cobras and open wheel sprint Cars.

However the Dune Buggy MArket was exploding and Bruce could not fill the orders that flooded in. Other manufacturers jumped in and produced over 350.000 copies and look-alikes. In the late 1960 and early 70`s over 300 companies worldwide copied the Meyers Manx in one form or another. Bruce tried to stop the floodgate of imitations with patent infringement lawsuits but was unsuccessful.

Bruce and Winnie Meyers sold their company to Trousdale Ventures in late 2020. The company will be called Meyers Manx, LLC

We are very proud that we were able to find a very, very special Meyers Manx.

This Manx was produced in 1966, regarding the VIN Number of the Chassis. Which makes it a very early Version of the Manx Buggy. It was bought and used by the Movie Star Chuck Connors in the TV Show a Cowboy in Afrika. It is said that Bruce Meyers wasn`t really a Fan of Chuck.

After the show endet the Manx was put up for sale and bought by Italian Edilio Rusconi, who was the Owner of the publishing house “Rusconi Editori” When the Manx arrived in Italy and was registered in Milan on the 2.7.1970 it already featured the still in place Porsche 356 Engine. Mr. Rusconi owned the Car until his passing away in 1996. After his passing the unique Meyers Manx was bought by Italian Artist Franco Bellucci. He is the one who changed the color from the Yuma Yellow Gelcode to the now featured red/white/blue color sheme. Luckily he did not change the Iconic wheels and search lights as already used in the show, a Cowboy in Africa. It was than registered and certified by Bruce Meyers as the original Car.

In 2017 the Buggy changed hands again and was driven in Monte Carlo before it found its way to a Collection in Austria.

If you are looking for a special Car like that, let us know.

Drop us a line michael@getyourclassic.com