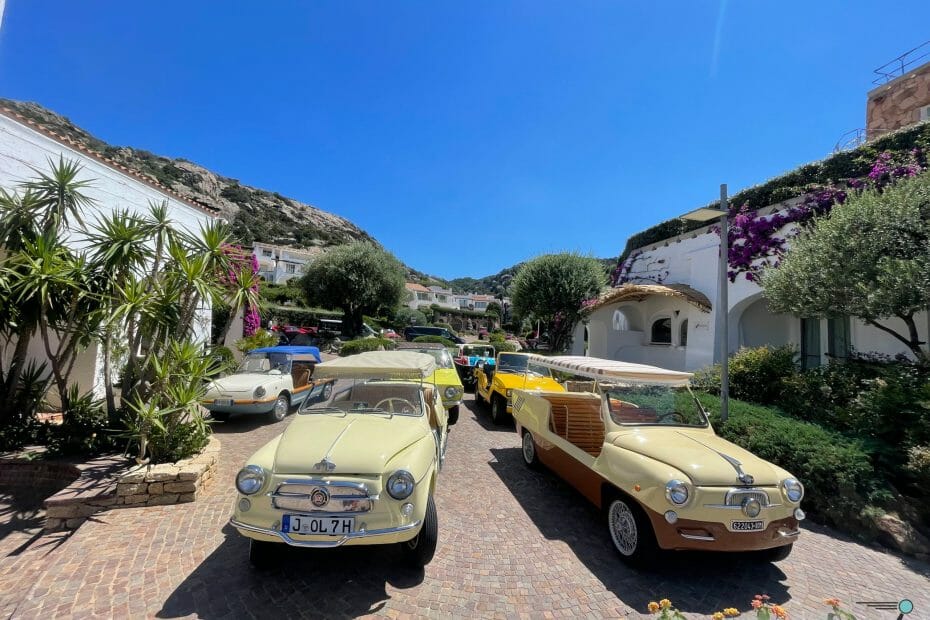 We were delighted that on this years Poltu Quatu Classic we were able to attend with a Fiat 600 Jolly by Ghia. Additionally, the original Meyers Manx in the red/white/blue livery that we recently sold was our competitor in the same class. There were 11 Spiaggine that animated the new Sex On The Beach class, a real cocktail of fantastic Beach Cars that brought a shower of smiles under the magical sky of the Costa Smeralda. He won the Dune Buggy Meyers Manx brought in competition by Mark Porsche and in the United States the news that an American had triumphed immediately went viral precisely on July 4th in the coolest category ever seen at an elegance contest.

The Beach Cars during the weekend were also celebrated by Larusmiani with the FuoriConcorso On The Beach event in Porto Cervo, with other fantastic beach cars that reunited with those of the new Sex On The Beach class of the Concorso d’Eleganza Poltu Quatu Classic for an aperitif at sunset on the Promenade du Port.

Honorable mentions for the Fiat 850 Shellette Spiaggina (Registro Fiat Award) by the great American collector Stuart Parr and for the Fiat Panda-Stola Destriero (Mauto Award) brought to Sardinia by the same family that had built it in 1992 in only two specimens , one destined for Avvocato Agnelli and the one in Competition, the tender of the Off-Shore Destriero crew left from Porto Cervo to conquer the Nastro Azzurro record (obtained by crossing the Atlantic Ocean from New York to the coast of England).

In the Rally Queens Class he won the Lancia 037 Group B of Gianmario Francone, while the prestigious Pole Position Award of the partner Pirelli was assigned to the Subaru WRC of the Consul of Antigua Carlo Falcone.

The 2021 event was also the first opportunity to closely admire the restomod of the Datsun 240z made by Garage Italia in the Back To The Future Class dedicated to cars subject to non- conservative restoration and which saw the final success of the Maggiore 308M built in Forte dei Marmi based on the legendary Ferrari 308 GTS by Magnum PI.

The majestic Lancia Astura Cabriolet Pininfarina from the Lopresto Collection won the A Matter of Style Class by beating the competition of the many other masterpieces of design masters present in Sardinia.

The historic La Dolce Vita Class saw the success of the Lancia Aurelia B24S Convertible of Strada and Corsa, which came from Holland to the Costa Smeralda on its wheels after a journey of over a thousand miles.

The prestigious St. Moritz Prize reserved for the most glamorous car of the event was awarded to the Fiat 600 Jolly Ghia of the German collector Michael Gross.

In the Forever Young Class dedicated to Youngtimers, the Jury of the Concours chose the Ferrari 208 GTB Turbo of Alex Donnini, one of the best-known Italian sports driving instructors, who beat the Lancia Delta Evoluzione of Max Sirena Skipper of Luna Rossa Prada Pirelli Team, the favorite car of the great Instagram audience that followed this edition of the Poltu Quatu Classic.

Precisely this enormous involvement generated on the most famous social platform in the world has prompted the organizers to publicly declare that from the next edition an official award will also be established that will be awarded directly by the Instagram audience.

The ASI Trophy was awarded to the Fiat 1100 TV of the Monegasque collector Fulvio Russo, while the very important Spirit of FIVA Award (only ten trophies awarded each year by Fédération International Véhicules Anciens in the most important Concours d’Elegance) was awarded to the Mercedes 300 SL Roadster of Andreas Dünkel who for the occasion equipped the iconic German car with a spectacular vintage water ski.